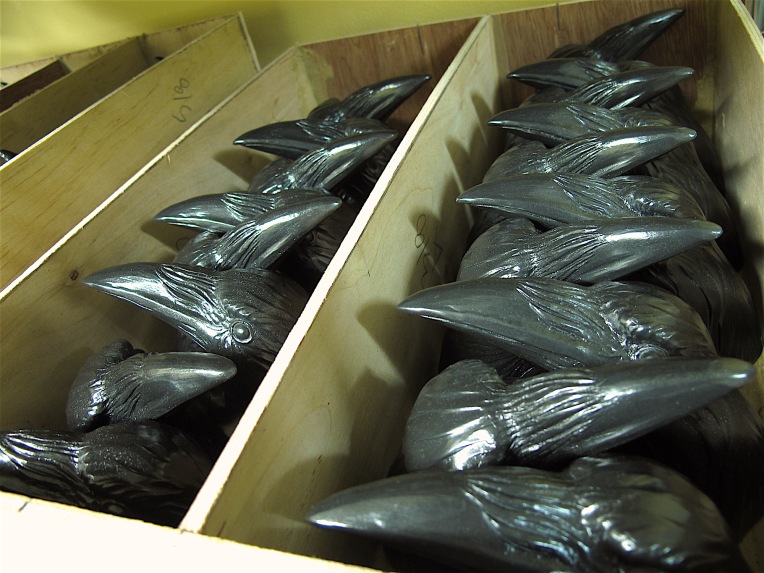 This entry likely won’t mean much to anyone but me…but part of the purpose of this blog is for me to be able to look back at where I’ve been…so I want to document/celebrate this major accomplishment: Today I caught up on crows/ravens! It’s a goal I’ve fantasized about for years: to get ahead of the game by filling all my 11 inventory boxes (one for each design) with nicely burnished, ready-to-ship sculptures. Today I finished! I now have a “cushion” of around 130 finished pieces to shield me from the tyranny of the urgent. 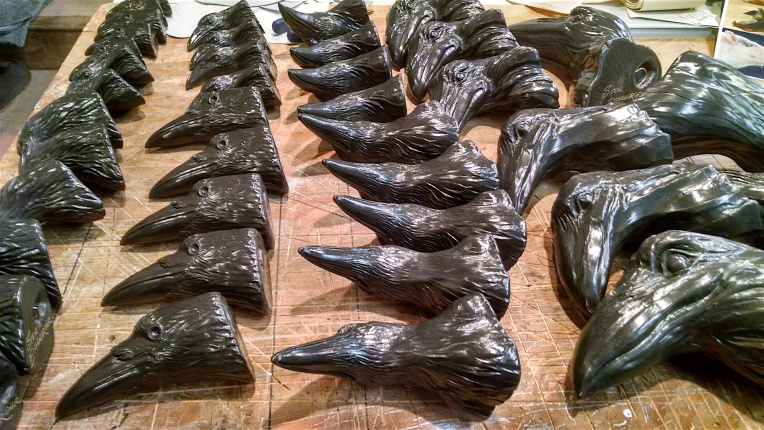 Why is this a big deal, you may ask? Well, previously when a large crow/raven order came in, I’d have to stop whatever I was working on and spend the next several days or weeks on non-stop casting, burnishing, shipping. Often the gallery who placed the order had waited until they were completely out of one or more designs, so there would be urgency to get the order out. And whatever self-expressive project I might have been working on before the order came in was all but forgotten…momentum/energy dissipated. But NOW, I’ll be able to ship right away; and to replenish my inventory I won’t have to suspend my self-expressive work but rather can spend two or three unharried hours a day on crows/ravens, with the remainder of each day FREE to work on fresh, experimental artwork… Guilt Free!

This new system also gives me an easily definable stopping point: full boxes. Once they’re full, I can make whatever I want — all day, every day! (and did I mention, Guilt Free?)

Let’s see…this will be the free-est I’ve been since…well, for many many years…decades?!?…or maybe ever. It’s been a long struggle toward freedom, and I’ve aged (considerably) in the meantime, but I’m really looking forward to getting back a sense of play, exploration and experimentation in my work!

Blog Posts Archive (click on •BLOG• above for infinite scroll)